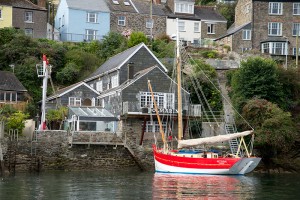 Polruan is 4-5 hours drive from London or the Midlands.
From Exeter, the quickest route is via the A38 Plymouth by-pass road to the Tamar Bridge at Saltash. Then continuing on the A38 past Liskeard on the by-pass to Dobwalls where a left turn is taken at the traffic lights on the A390 St Austell road. Follow the A390 for a few miles to East Taphouse where just beyond the village is a well signed left on to the B3359 in the direction of, among other places, Polruan (12 miles).

Then follow the Polruan signs very carefully but do not equate Fowey with Polruan or you will find yourself on the wrong side of the harbour!

Towards the end of your journey, patience and persistence may be required, because as the lanes grow deeper and narrower, the bends also become more tortuous and the sea stays hidden until you have almost arrived! 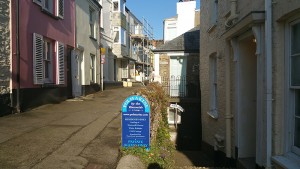 Visitors to Polmarine are advised to drive straight down Fore Street (which is the road on which you enter the village), and park temporarily at the bottom near the crossroads of East and West Street.

West Street, on the left, is alarmingly narrow near the Russell Inn but the steps to Polmarine at the far end of the Waterfront Apartments are only 100 yards on the right.

Polmarine and Polruan in general are not suitable for people with wheelchairs and walking disabilities. 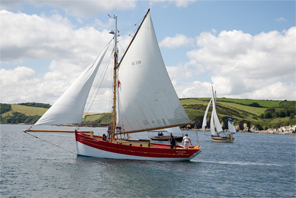